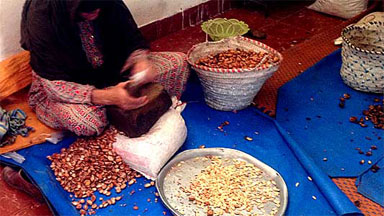 A story of how family groups came together to create the Argan Oil women’s cooperatives owned entirely by Berber women.

Of, how one Moroccan university professor’s interest in the economic preservation of the Argan tree transformed a traditional craft into a global trade.

A project that improved health. education and increased their the members income by more than ten times.

Who owns the Argan Trees? 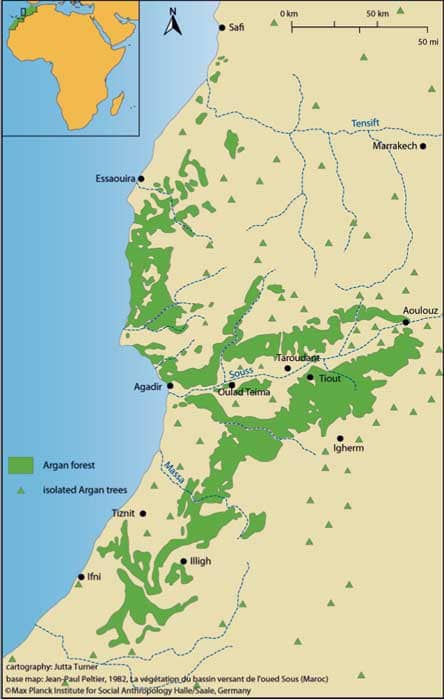 Argan Oil has been made for hundreds if not thousands of years by the native inhabitants of Morocco, the Berbers.

In particular the Tashlahate  ( Tashelhit ) speaking Berbers of the “Souss”. These Berbers occupy lands between Marrakesh to the north and just south of Agadir and from the west coast over towards the Algerian borders.

This is where the Argan forest grow. The more dense regions being closer to the low coastal areas and in the mountains south of Marrakesh.

Traditional preparation of Argan Oil by Berber women was a very labour intensive affair with low production yields. This made commercial sale of Argan Oil outside of Morocco impossible. Argan Oil co-operatives have now made large scale production this possible.

Argan trees are grown on small and large plots of land that have been owned by families for generations. When the Argan fruits ripen in June / July the fruits are picked and left to dry before being stored in large sacks. The nut kernels removed from the nuts and ground, by hand, using a grindstone.

Water added to produce an oil-rich dough which was was then squeezed to extract the Argan Oil. This was a very labour intensive process and it would take about 1 week and about 20kg of Argan nut kernels to produce 5 litres of oil.

They built modern cold-pressing plants far away from the Berber Argan forests in cities like Casablanca. Modern pressing machinery enabled them to produce a higher quality oil with a lower water content and longer shelf life at a lower price.

The role of the women of the Berber communities was reduced to little more than a supplier of raw Argan nut kernels. By early 2006 there were an estimated 16 private pressing plants owned by foreign investors. Little of the profits from these Argan Oil producing companies found its way back into the communities.

The Formation of the Argan Oil Cooperatives

As a  professor at Mohamed V. University in Morocco, she developed an interest in the Argan tree. Not only the use of its precious oil for skin care and for health but also with a passion for conservation of this natural resource.

When the project started, Morocco was losing more than 600 hectares of Argan forest each year. By teaching people the value of their trees the professor was able to develop a new found respect for their valuable forests.

Where once Argan tree wood would be stripped to produce charcoal and animals would graze the trees farmers are now beginning to plant new trees, fence off and protect valuable forest and take good care of the trees.

To help Berber communities compete with the foreign owned pressing plants NGOs from Europe began to support the development of Berber women’s cooperatives. Funding was provided for new mechanical presses and dedicated buildings where farmers could bring their Argan produce for processing.

Government and foreign agencies also paid the considerable costs of getting internationally recognised organic certification for the Argan forest and the oil produced.

Projects were started that improved the extraction of oil by involvement of the Berber women in establishing oil producing cooperatives. By bringing a more business like approach to the Argan Oil cooperatives Professor Charrouf helped to boost both production levels and the quality of oil.

Now families are able to take their crop to one of the many Berber women’s cooperatives.  Here the process of cracking the nuts is done communally by large groups of women. The pressing of the oil done by a modern cold pressing machine.

The Story of Toudarte Imsouane

An Inspiring documentary produced by aroundtheworld.coop

The Benefits of the Cooperatives

Increased productivity allowed the women’s cooperatives to compete on an international market.

As the market grew they were able to keep up, and benefit from, the growing demand.

This brought much needed income to the cooperative and families of the region. However, more importantly, it has emancipated the women by offering them a real, sustainable living wages and independance.

Cooperative members now earn around 75 Dirhams/$8.60 a day( 2013), an increase of more than ten times from when the projects started in 1997 and this is a real living wage.

Literacy and numeracy programs as well as better access to health care have brought a new freedom, a higher standard of living.

“Being part of the women’s cooperative freed me from tedious domestic work in people’s homes,” said one co-operative member.

“Now I’m learning to read and write and I’ve learned how to ensure the quality of the Argan kernels. The cooperative has made me more independent. I’ve been able to visit other cooperatives in other provinces. I’ve seen how girls and women like me have been able to shape their own destiny and move ahead to develop their cooperatives.”

In Morocco, even until very recently, it was not considered necessary for Berber girls to complete or even attend schooling. Tradition decreed that the destiny of girls was marriage. Increased literacy sponsored by cooperative system in Morocco allows the Berber women more power and independence.

Even older generations have been keen to take up the new opportunity to learn literacy and numeracy. Studies undertaken to compare the health of illiterate and literate Moroccan Berber women in Holland. In the control groups, which were compared for age, work and partners, it was found that literate people enjoyed significantly better health.

You can buy our certified, organic oils directly from some of our web pages where you see the “add to cart” buttons.

You can also find our full range of products on our online store.

All our oils are 100% Pure, Organic and Extra Virgin pressings including.

What is Argan Oil? ⯈

How Argan is Made ⯈